Karbala: Pilgrims from 80 countries around the world entered Iraq to participate in the Arbaeen Pilgrimage of Imam Hussain (peace be upon him) 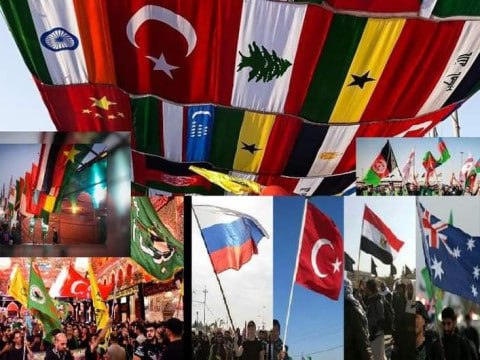 The Holy Karbala Province announced the number of countries from which pilgrims entered Iraq to participate in the Arbaeen Pilgrimage of Imam Hussain (peace be upon him).

The Second Deputy Governor of Karbala, Ali al-Mayali, said, "Pilgrims from 80 countries entered Iraq during this year’s pilgrimage, and the government's efforts combined with the efforts of the two holy shrines, Mawkib owners and the people of Karbala, provided various types of services to pilgrims, including transportation, food, accommodation, in addition to health services, communications services and other services.”

He added, "The pilgrimage reached its climax, as the transportation movement was almost equal to the number of pilgirms entering and leaving the holy city of Karbala, stressing that the number of foreign pilgrims who entered Karbala is estimated at five million so far."

He pointed out that "many of them left the city in a smooth way, with cameras monitoring their traffic."

Al-Mayali explained, "The city has witnessed great pressure on the consumption of water and electricity, and there has been a shortcoming, but it is beyond our control, because Karbala, as a province, has projects allocated to one million and 200 thousand people only."

The Deputy Governor stated, "The efforts made by the Mawkibs and the authorities supporting the pilgrims greatly reduced the pilgrim’s suffering, and they indicate that these sincere efforts are keen to serve millions of people in limited days and that unseen matters facilitate work during this blessed event."