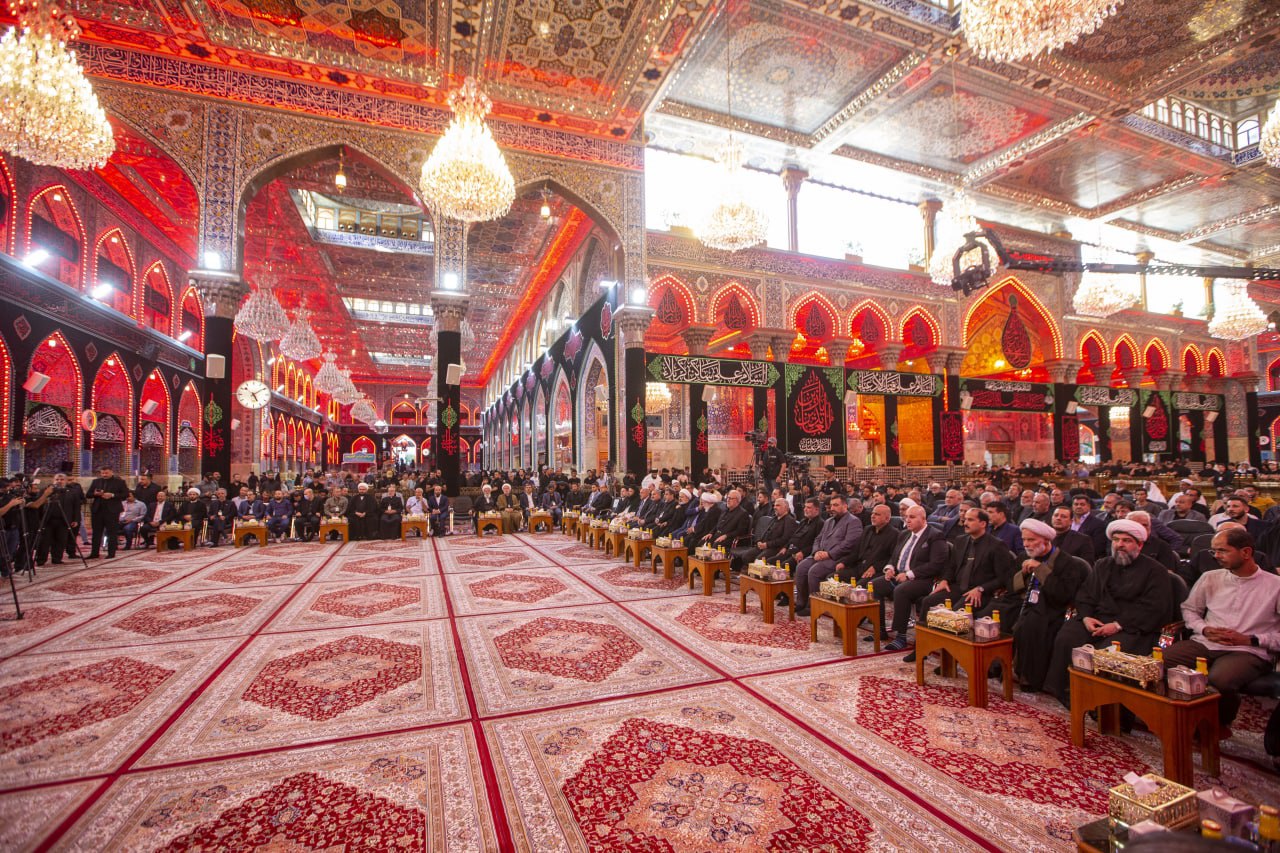 Imam Hussain Holy Shrine witnessed the launch of the activities of the 8th International Tarateel Sajjadiya Festival, which was held under the slogan “Building and Reforming the Human Self in the Supplications of Imam al-Sajjad”, in the presence of 46 personalities from 19 Arab, foreign and Islamic countries.

In his speech during the opening ceremony, Sheikh Abdul-Mahdi al-Karbalaey said, “On this great occasion, the 8th edition of the Tarateel Sajjadiya International Festival, I would like to clarify the following matters: The first matter is what are the reasons for holding this festival related to the heritage of Imam al-Sajjad, peace be upon him? To answer that question, the first reason is that many social segments have neglected the knowledge and educational treasures in the Sahifa al-Sajjadiya, which led to the Sahifa being given the devotional and educational attention it deserves, and thus depriving many members of society from the opportunity to provide the religious and educational provision they need, in light of these intellectual, educational and social challenges.”

Sheikh al-Karbalai added, “The second reason is to provide an adequate opportunity for researchers and investigators to give the supplications of al-Sahifa al-Sajjadiya with care and proper research, as it carries a mixture of abundance of knowledge, spiritual flow, revival of hearts, refinement of souls and creativity in eloquence. As a result, we find the necessity for the people of research and investigation to contribute in order to provide a scientific asset that can enhance the religious and educational value of this Sahifa for thinkers and intellectuals in general.”

The representative of the Supreme Religious Authority explained, “The second matter is that among the advantages of Al-Sahifa Al-Sajjadiya are its combination of religious knowledge in the divine attributes and the requirements of worship to God Almighty, and the adornment of the soul with noble morals in all its subtle branches. These matters are combined with spirituality in the form of supplication.”

He pointed out, “The third thing is that the challenges experienced by the Islamic community at the time of the Sahifa’s publication from the social and moral dangers that resulted due to the openness of Muslims to diverse cultures, legislative norms and social conditions, are not commensurate with the intellectual originality of the Islamic community derived from the Holy Quran and the honorable Sunnah of the Infallibles, peace be upon them, and all these challenges necessitate adherence to the intellectual legacy of the Sahifa Sajjadiya.”

Al-Karbalaey made it clear in his speech, as for the fourth matter, that the people in the seminaries, professors, educators, and intellectual institutions are called to give Al-Sahifa Al-Sajjadiya broad attention,” calling on postgraduate students of master's and doctoral studies "to make among the titles of their university theses the analytical studies in the supplications of Al-Sahifa Al-Sajjadiya."

In conclusion, Sheikh Al-Karbalaey extended his thanks to the organizers of the festival as well as to the researchers, who contributed their research and valuable writings to the international event.

For his part, head of the preparatory committee for the festival, Jamal al-Shahristani, said that “the festival also included the Khutwa International Photography Competition and the Short Story Writing Competition, in which several photographers and writers from the around the world participated.”