Ten lessons from the day of Ashura 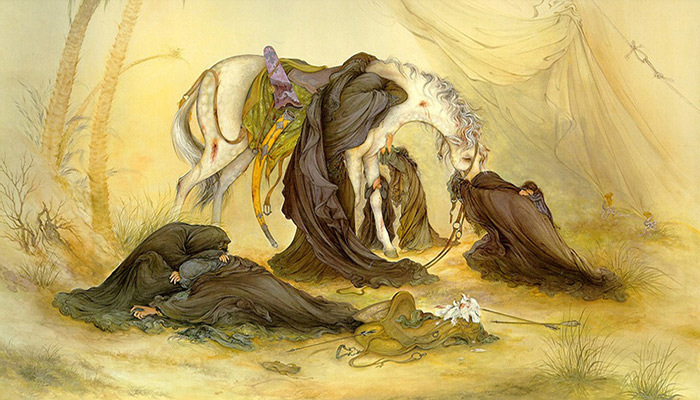 The day of Ashura for millions of Muslims around the globe is a day of mourning the calamity that befell Hussain, the grandson of the Prophet Muhammad (PBUH), and his family and companions in a land called Karbala. History calls it a battle but it shared more similarity to a massacre, as the army of Yazid (the Caliph of the time) descended on the camp of Hussain (who refused to pay allegiance to a corrupt leader), and the hundred-odd family and companions of Hussain heading out one by one to the battlefield to fight and ultimately be slaughtered by an army thousands strong.

The battle ended with Hussain requesting water for his six-month-old infant (the camp had been without water for three days beneath the blistering heat), only to see his child killed by an arrow, before burying him and heading out to the battle and ultimately his fate. After his death he was beheaded, and the camp that contained his sister, wives, daughters, and other female family members was ransacked, before they were taken out as captives.

The ultimate tragedy here is that Hussain was the grandson of the Prophet Muhammad who died only decades earlier. Of his grandson, he says the famous words,

“Hussain is from me, and I am from Hussain. Allah loves whosoever loves Hussain.”

Undoubtedly it was greed, evil and the love for this world that led these people to massacre the beloved grandson of the Prophet, who himself stood up for the sake of the oppressed against the face of oppression, for the righteous and pious, and for the sake of the religion of Islam. Of his refusal to pay allegiance to Yazid, he said,

“I am ready to fight for the sole goal of seeking reform of the Ummah of my grandfather, the Prophet of Allah. I want to enjoin good and forbid evil and guide the affairs of the people as my grandfather, and my father, Ali bin Abi Talib, were doing.”

There is an incredible amount of lessons for humanity to learn from the day of Ashura. Below are ten:

Ultimately, all that Hussain did on that day, he did for Tawhid – the oneness of God. Rising up against tyranny in order to reform the mission of his grandfather, whose sole purpose was preaching one God, Allah, through the religion of Islam. The sheer faith he had in Allah can be reflected in this prayer he recited before his martyrdom,

“Although this world is considered to be pleasant, the reward of Allah is magnificent and meritorious; and if the body is created for death, then martyrdom in the way of Allah is the best for man; and if sustenance is distributed and assured, then man should not strive hard to seek it; and if the gathering of this wealth will result in leaving behind, then why should man be avaricious?”.

2. Never allow yourself to be humiliated

Among his many speeches, Hussain in one speech mentioned that the authorities gave him only two choices: humiliation, or death, carrying on to say,

“and we do not accept humiliation.”

3. It’s never too late to repent

One of the heroes of Karbala that met his martyrdom is known as Hurr (which means free). He was one of the commanders of the opposing army, and his actions were instrumental to leaving the camp of Hussain stranded and under siege in Karbala. It was only in the final few hours before the battle that he switched sides to the army of Hussain and to certain worldly doom, asking the repentance of Hussain for his actions. He was one of the first people to be martyred by the army of Yazid. The story of Hurr is proof that it is never too late to repent, and no sin is too heavy to come back from. Hussain said to Hurr after he repented,

“surely you are free as your mother had named you.”

4. When life is hard, remember that Allah is watching

“It’s bearable only because Allah is its witness.”

5. Be a free thinker

A famous hadith of Hussain from the day of Ashura says,

“If you do not have any religion, then at least be free (open-minded) in your present life.”

In a world where thousands were blindly paying allegiance and accepting the rule of a tyrannical leader, Hussain chose to think freely. This is an incredibly important life lesson for us all – we need to ensure that we continue to be free thinking, open minded, and reanalysing all that is around us.

6. Always support and defend the truth

Islam represents the truth, the reality in a world of falsehood, and this is precisely what Hussain stood up to defend. Not only did he defend it, but he sacrificed all that he had for the sake of it. His son, Ali Al-Akbar (Ali the eldest) asked his father on Ashura day, ”are we not supporting the truth?”. Hussain replied yes, to which his son replied,

“then, it makes no difference if death comes to us or if we approach death.”

Few achieved a status of glory from the day of Ashura like the half-brother of Hussain, Abbas ibn Ali, and for good reason. His nickname is Abu Fadhil (the father of virtues), because he displayed every virtue known to man on the day of Ashura. The flag bearer of Hussain’s army, and feared by the opposing side to the extent that they granted him free pass to leave, he remained fiercely loyal to Hussain and the camp of Hussain, and only met his demise when he attempted to reach the river to fetch water for the daughters of Hussain who were dying of thirst.

Upon reaching the river, he attempted to drink the water himself, before remembering the thirst of Hussain and his children. He threw the water back into the river, refusing to drink, in a moment that was the epitome of selflessness. It was after this, upon his return to the camp, that his arms were severed by hidden enemies and he was killed by the army of Yazid. Among the many lessons that he gave us on that day, perhaps the peak of it is selflessness, reminding us that others will always come first.

Those who are aware of the story of Hussain often reflect on his tragedies and the patience he exhibited during that day during their own hardships in life. This wasn’t a type of patience that came from a type a weakness, but a demonstration of his steadfastness and bravery. Those who saw Hussain on the Day of Ashura reported,

”We have never seen a man remaining as composed as Imam Hussain was when his relatives and children were slaughtered before his eyes.”

9. Enjoin the good, forbid the evil

An essential pillar of Islam, every Muslim is required to forbid evil and enjoin good, and this is what the stand of Hussain epitomises. In a speech he declared that the only objective of seeking this reform is to emphasise the significance of enjoining good and forbidding evil.

After the massacre, the tents of the daughters and granddaughters of the Prophet Muhammad were ransacked and set alight. It was here that Zainab Bint Ali, the sister of Hussain and granddaughter of the holy Prophet, took leadership of the remainders of the camp. Women who were known for their incredible hijab (both physical and social) and their chastity were paraded as captives all the way to Damascus for the world to see. Despite this, Zainab stood firmly in the court of Yazid and delivered a famous speech that put his entire reign to shame. In it she said,

After the battle ended, it was a Muslim woman who led the remnants out of the ashes, challenging the tyrannical figure who led the entire Muslim world. A pure example of female empowerment in Islam.