The Stand against Injustice 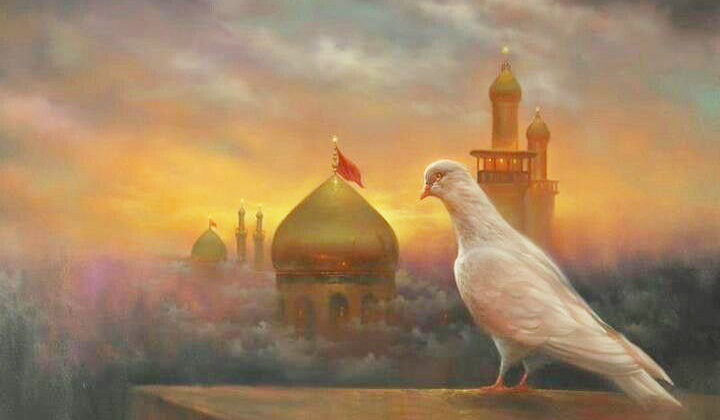 The Imam and his followers on the eve of Ashura

The Imam gathered his companions and relatives and addressed them, repeating that the enemy was only concerned with him and they could escape the danger that lay ahead in the darkness of night. But the faithful companions answered each in their own way, that they would not deviate from the right path and would never abandon him. They said that they would defend the Household of Prophet to the last drop of their blood. The enemy intended to start the attack on the evening of the ninth day of Muharram, but the Imam asked for a delay till the next morning so that he could spend his last night onthis earth in prayer. A few of the enemy soldiers in the morning joined Imam Hussain, such as Hurr B. Yazid al-Riyahi who was one of the generals of the enemy army. They chose to be with the Imam, and the Imam accepted their choice andrepentance. In this way the number of his followers became close to 90 people consisting of 72 companions and 18 male members of his family and relatives, while the enemy that stood against them was numbered in the thousands.

The 10th day of Muharram

The dawn of the 10th day of Muharram came and Imam Hussain led his companions in the dawn prayer. After the prayer was completed, he said to them, ‘Allah has destined my death and yours on this day; you should fight and have fortitude.’ He drew up his band of followers and prepared them for the attack. When he saw the huge army which was going to fight him he wept, and when they asked the reason why he said, ‘I shed tears for this army which will go to Hell because of me!’ The Imam then prepared himself for combat although he had no desire to start hostilities. After he had made supplication to Allah, he counselled the enemy inviting them to repent, but they were unmoved by the words of the Imam. Then the companions of the Imam also counselled the enemy not to fight the grandson of the Messenger of God, warning them of Allah’s wrath, but again they were not moved.

When the Imam saw that there was no other way to defend the religion of his Grandfather, and to defend his womenfolk and family, after all his companions and supporters had been slain he went forth to the enemy, sword in hand, and defended himself. He killed many of the enemy. When Amr ibn Sa’ad saw that al-Hussain could not be killed in single combat, he shouted to his troops ordering them to surround the Imam on all sides. They tried to push forward to the camp of the family of al-Hussain, but he said to them, ‘If you people do not follow the teachings of Islam then at least be as free men and behave according to the manners of your family. Exclude the children and the women from your transgression.’ The enemy went on fighting him unmoved by his words. The Imam, being thirsty, then went towards the river and sought to drink, but an enemy solider said to him, ‘Do you drink the water joyfully when your family is in our power?’ The Imam cast the water from his hands and went to the camp to protect his family. He told his family that he was going to leave them and bid them farewell and counselled them to have fortitude, then he went into the arena of battle and started fighting, slaying many. When he reached the riverbank, they surrounded him and two arrows were shot at him; one wentinto his neck and the other into his mouth. He pulled them out and supplicated Allah to avenge him against these people. Umr ibn Sa’ad ordered his troops to attack Imam Hussain since he was on the verge of death. They shot arrows at him till he was greatly wounded and all his body was pierced with arrows.

The Imam remained for some time in this state. His foes were afraid of going near him because of his holy and sacred status, but then Amr ibn Sa’d shouted to his troops to kill the Imam. The Imam displayed great fortitude despite his many deep wounds; he had sacrificed all for the sake of Allah. As the Imam lay on the ground heavily wounded, al-Khawly ibn Yazid al-Asbahi approached him to cut his head off, but he became filled with fear and awe. Then Shimr the accursed went forward alone to do this horrible deed; he slew the Imam and cut off his sacred head. The battle ended with the burning of the tents of the Imam’s family. The womenfolk and the children were taken as captives to Ubayd Allah ibn Ziyad in Kufa. Then theywere taken to Yazid ibn Mu’awiya in Damascus. Truly, the Imam accepted the call of Allah and died whilst striving to the last drop of his sacred blood to preserve Islam and to prevent dissension among the Muslims. His rising can be seen as a call to the people to adhere to the truth.